Battelle works to turn coal into foam for commercial use 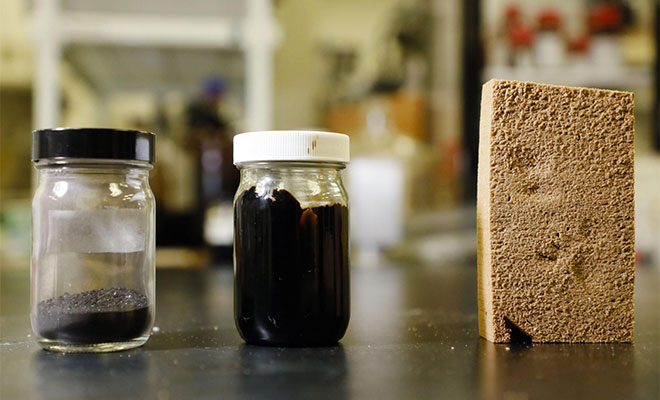 By Beth Burger
The Columbus Dispatch

Battelle, a research and development company, has secured a $1 million grant to perfect the process of turning coal into commercial foam products. One side benefit: The carbon from the coal would be permanently captured in the foam product.

With Christmas just a day away, some people might be worried about getting a lump of coal from Santa.

Battelle has a solution for that.

The research and development company based in Columbus is working on converting bituminous coal into polyurethane foam products as part of a $1 million grant, with the U.S. Department of Energy funding 80% and the state of Ohio 20%.

“When the government said, ‘Hey, you know, we’d like to find higher-value applications of coal’ – so they’re very interested,” said Satya Chauhan, a senior program director and chemical engineer at Battelle. “That was the objective. That’s why the project came (about).”

It turns out it could pay to be naughty and not nice.

Coal sells for about $50 to $60 per ton. The polyurethane foam that Battelle is working would sell for an estimated $5,000 to $6,000 per ton. The goal of the grant is to convert coal into high value products.

The kind of foam that holds its shape is normally petroleum-based and used in construction projects or even vehicle parts such as bumpers. Coal converted using heat or solvents can achieve the same end result, becoming dense and rigid foam.

Hydrogen is added to the finely ground coal to form fuel oil.

“We figured out that if you could add some hydrogen to coal, you could make a liquid out of it,” Chauhan said. “It would be a heavy liquid. It would be heavier than petroleum crude. And depending on how much hydrogen you add … you can make diesel. You can make jet fuel.”

The coal-based intermediate crude oil is treated with ozone, turning it into a polyol, an organic compound containing multiple hydroxyl groups. The polyol can be made into foam.

“Coal has an inherent rigidity because of its structure (that) you can’t find in regular polyols,” said Daniel Garbark, a principal research scientist at Battelle. “Typically, polyols come from soy, where maybe you have a floppy structure.”

There’s an important side benefit from this project, the researchers said. While the negative environmental effects of mining aren’t offset, the carbon from coal would be permanently captured in the foam product.

“This is an important project to illustrate the importance of employing a wide variety of approaches to use fossil fuels in an environmentally responsible way and reduce the amount of carbon dioxide we release into the atmosphere,” said Chauhan, who has spent decades working with coal. (In 1978, Chauhan was able to develop a method for converting high-sulfur coal into a cleaner-burning solid fuel.)

Researchers estimate it would take about five years to perfect the foam-making process and bring the product to market.

It’s unclear, though, where coal production will be by then.

Despite the Trump administration’s rollback of environmental regulations and the president’s vocal support for the industry, numerous coal companies have filed for bankruptcy.

Nationally, coal production has dipped to 1970s levels. In Ohio it’s even less, with production in 2018 about where it was in 1886, as the market has shifted to natural gas.

Ohio produced 7.84 million tons of coal this year as of Dec. 14, according to the U.S. Energy Information Administration. That’s an 8.5% decrease compared to the same period in 2018.

“There’s a place for every raw material. Also remember that the availability of these resources will change over time, ” Chauhan said. “You might find that 50 years from now you haven’t used much of the coal. It’s still there. It didn’t go anywhere.”